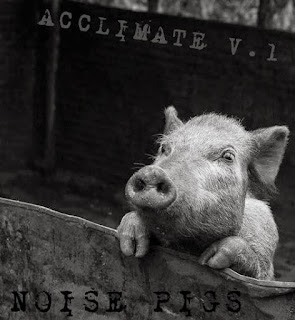 Artemis Kowalski who has been active making post-industrial noise ambient in his own personalised style is back again with his cuzzie from US - Phillip B. Klingler a.k.a. PBK - a legend of tape music and DIY experimental.
What I feel as a great advantage of this release is that is being made as a total hobby which is actually felt by the professionalism which bears no profile of insouciant rehearsal but is embellished and elaborate on its own terms.
Artemis professeses himself in climaxing dialogue of analogue and digital synthesis as well as drive towards giving his music a feel of a non-existent movie soundtrack with the narrative and sci fi feel to it. His American cousin adds a quality of lo-fi noise and experimental music which stretches between illustrative disharmonics of 1990's and 1980's sound now re-invented and given new interface.
All the tracks are composed with a density and intensity of a hardworking machine that is driven by a soulful and existential trickstery.
It's good to know that these cats are around and hopefully they will records again.