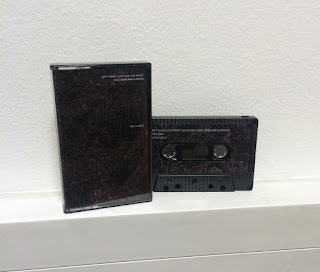 Graham Dunning and Robbie Judkins divide their collaborative album into long tracks - over 30 minutes each. Before I even listened to their material on Graham's bandcamp I thought listening to it on a tape would be much better and I have to admit that it went really well.
Long compositions don't prompt me into thinking that it is going to be just another boring drone ambient album and the more they evolve I got a notion of two mature artists who work within the idiom of sound art but there is emotional line to their work that helps to make this beautiful piece of work more than just an experiment. There is a gem of yearning, depth to it that creates an intimate feeling to it that is not lost between the verses of glitchy bleeps and unison machinery voices, a rhythmical pattern that reminds me of something genuine and additionally it has the quality of ethnic music in an electronic sauce.
Both Robbie and Graham have an excellent background in academic sound art and I was a little bit afraid that it might just cancel the DIY spirit that these both represent uniquely in their solo careers but nothing of this sort here. There is honesty in this music and that what makes me feeling like coming to it back and back again. Bring on the flavour, chaps! Great stuff!