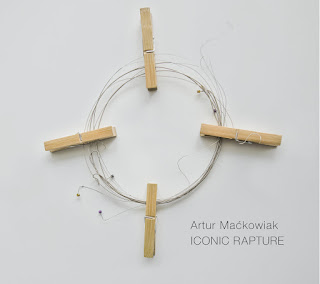 Artur has been on my spot for good couple of years and it was since I heard Something like Elvis, legendary Polish post-hard core/jazz core band that spanned over the genres of jazz core/emo core/post post post whatever giving truly original sound to their explorations. Quite recently Artur has been active with Innercity Ensemble and other projects - both solo and collective.
His recent work bears an imprint of an experienced musician who experiments with his directions but at the same time has a sure hand of leading it within a certain linear continuum.
"Ironic rupture" sets of in a quite melancholic, lyrical mood which might be used as a soundtrack with carefully planned guitar movements and themes that are elaborate. As with skilled and talented musicians - Artur crafts it almost effortlessly not using too many notes - he is thrifty yet delivers something that sets deep in your mind.
The other side of this material is soundtrack derived tonalities which recur 80's soundtracks and lyricism of childhood - a sci fiesque quality of it - soft and disturbing at the same time.
He includes also a lot of subtle references to the rhytmicalities and tonalities of ethnic percussive music  but in parenthesis - modulated through his idea of experiment.
Definitely one of the best albums I have heard recently.