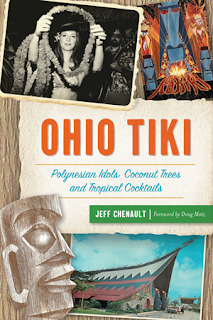 Jeff Chenault is a rare type of an artist who is pro-active in the fields he writes about and works on.
A musician and a producer, currently working on rare exotica music for Dionysus Records. He co-wrote a book "Kahiki Supper Club: A Polynesian Paradise in Columbus, Ohio"  with David Meyers, Elise Meyers-Walker, and Dough Motz. He also wrote in other publications such as Bachelor Pad Magazine, Tiki Magazine, Exotica Moderne, Cool and Strange Music Magazine.
What is the Tiki and Exotica phenomenon? I asked myself a question of human consciousness and archetypes reading a great book on history of local Tiki places and design that Jeff took time and energy to describe elaborately in his work.
The ways towards understanding it are many. Jeff points out in his preface that he's been introduced into it through exotica music, something that transforms places designed in a specific way to ''virtual time machines'' It's a good starting point into the art and the  world of exotica in terms of cuisine.
The book is a literal goldmine of finding information on time that is gone perpetuating in the mythology of its own.
The distinction between 1930's and 1940's Polynesian themed places towards more Hawaiian orientated style of restaurants, bars and clubs that surged later in 1950's and 1960's is signposted also by the distinction between the type of music that was present there. Recovering from The Great Depression was tough process and you can see a wider context of those social and cultural changes in a local aspect - namely Ohio.
Places in Columbus, Cincinnati, Sharonville, Montfort Heights, Cleveland, Dayton, Euclid, Bedford, Grand River, Lima, Chillicothe, Sandusky, Maumee, Fostoria, Stow, Massillon, Canton, Mansfield, and many others. Even a short note names you think how much personal and individual stories are behind those logos, interior design, beautiful covers of leaflets.
As soon as I dip yourself into the multi layered universe of local stories, distinction between the tropical places and properly Tiki-themed places, the music that surrounds all that, you begin to understand the richness of cultural and sociological aspect of it.
Jeff did an enormously wonderful work, bringing the spirit of classy entertainment, something that is both rare and stylish. Numerous pictures couldn't  be submitted because of the quality, reading the anecdotes makes you think that the volume of the work done here is both enormous but not yet exhausted.
A wonderful trip! Mahalo!

link to the publisher