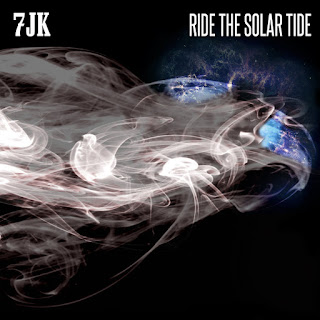 7JK are Matt Howden and Job Karma's Maciek Frett and their are coming big time with their second album "Ride the solar tide"
Probably the biggest compositional value of this album is its flexibility - it's one of those types which can fit into many pockets and has diffusive quality of songs that can be a soundtrack for anything you wish.
Job Karma's Maciek Frett has gone through many stages of musical development from harsh industrial clinical endeavours to more illustratory soundtracky albums with glimpses and touches of experimental post-industrial genre.
His input here is a rich pallette of beats and synth backgrounds and leads with sampled voices. It is derived from new beat, ebm, synth pop of the best type. It feels like neoclassical which is where Matt Howden comes in...
He has a deep sense of conversation with Maciek's base but also doesn't overdo it with his violin parts aligning his parts with what's going on in either foreground or background.
"Ride the solar tide" is a good material with strong communication between the members which are both leaders in their own respects. You can listen to it from a take of sophisticated pop music or post-industrial ambient music or ,which I did myself, soundtrackesque lead.
It's a nice break from what they do in their own fields. Hopefully they can develop the ideas here and record more.