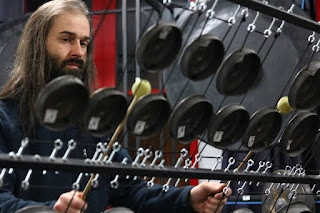 Paweł Romańczuk is one of the founding fathers of Małe Instrumenty collective. An excellent experiment of friends playing together on small acoustic sound-making devices introduced a heck lot of vitality, inventiveness that is not afraid of limitations given. Since then they managed to put into an art world a world of a difference collaborating with different art institutions, showcasing their body of work on many festivals and releasing interesting albums.
Here comes a solo album of Paweł Romańczuk.
First thing you can notice - even if you are well-listened audience is the quality and uniqueness of sound - whatever, anything that Paweł could play bears the originality and something that you cannot copy at all. If you feel like labelling it - the closest possible would be probably the work of Harry Partch - his scales and using invented instruments and Pierre Bastien and also Klimperei. But these are just signs that make you feel sort of safe to know where you are - well... more or less....
How to define it then?
I would get close to creation of a soundtrack with melodies, broken, whizzing and sizzling rhythms where a toy or an object becomes of a deity in its own respect - playing part in a memorandum, a sacred ceremony which traverses pastiche and illusion - it creates actual reality of what can happen when we are devoted of hi-tec and instead of that we tread the path of creating...well ... something out of nothing.
They are mesmerising songs with trance polyrhytms and genuinely interesting narratives transporting into a a magnificient world of childhood serenity and twisted mechanics of dreams.