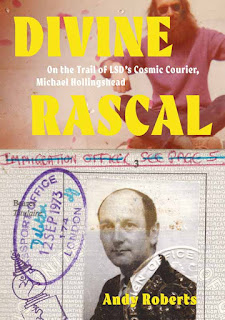 A research towards a book can be a harrowing experience and I can only imagine all the narrow trenches that Andy Roberts had to go through to find out about quite an elusive and enigmatic persona such as Michael Hollingshead.
Let's start from the beginning.
Born in Darlington, county Durham in the North East part of England as Michael Shinkfield, he might have possibly not left if it wasn't for a mysterious event that even his parents were quite embarassed. Even omitted in his autobiography, this event led to his pre-mature exile, over 300 miles away to Red Hill School in East Sutton, Kent.
His career has many loopholes and blank spaces. Why did he leave for Denmark after serving in RAF? Suffice to say he secured a paid position there, teaching English at university of Copenhagen. It was also the place where he met Ebba Riis-Peterson, his future wife.
And that's only the beginning of an involving story that unfolds itself in very interesting alleyways and sidetracks and swerves but is nothing short of interesting discoveries of ...well, who he was? A trickster who set himself comfortably into the landscape of swinging London. An Intelligence agent gone wrong? A person who had an interesting if not stormy relationship with his American counterpart - Timothy Leary?
It's a portrait of a self-made man, a Zelig who traded a cargo of intelligence, uncanny instinct for an Unknown of self-discovery that changed and altered him forever. A man that on many levels was a precursor of LSD experience in U.K.
It's a trip of its own kind - both zany and anecdotal but also helping to understand why we don't have such colourful figures anymore. The answer is simple and yet not that obvious - To create is to destroy yourself and rebuild again. Rarely anyone takes this opportunity and risks a farce. He did...