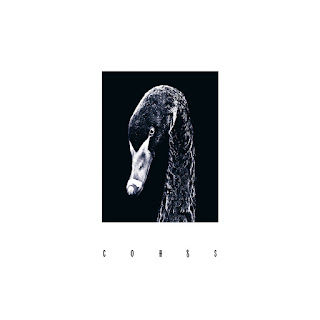 Here we go again. COH is striking again with his newest album "COHGS" released by Mego.
8 tracks and featuring different vocalists he collaborated with over the years.
So this album makes it kind of revised feel to it with a variables of lyricism and focus on the features - and mighty features we have here.
First tracks features Ann Demeulemesteer -lightheaded piano sounds and resonating timbre of her voice. Second one introduces a bit more repetitive synth loops with tension and rising organ sounds that features subtlety of Anna Yamada voice leaving her a lot of space. "Silence is golden" - next track features the late Peter "Sleazy" Christopherson vocal, whispering, intonating, with more experimental modular quirks, definitely worthy of the Coil's heritage. First side of the album finishes off with FFFFetish featuring Frankie Gothard slapping the electro tones in a style of Chris and Cosey or Throbbing Gristle.
The next side starts with Little Annie voiceover, spoken word style with subtle experiments on arpeggios and looped theme turning slowly in "typical" COH's electro industrial style. John Balance and Lousie Weasel are featured in the next track "Love's septic domain" which nicely confines with reference both in title and drama to its Coil counterpart. Noriko Taguchi comes into the sight in the next track "Alcohol" which is both full of naive simplicity, softness and sophistication of a child-like play.
And in the last one Little Annie encapsulates what this album is about - a bit of lyricism, melancholy, word turned into a voice and vice versa. The coda to something that is almost lost but being transformed comes to life again.