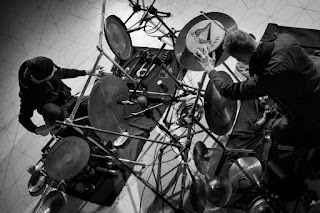 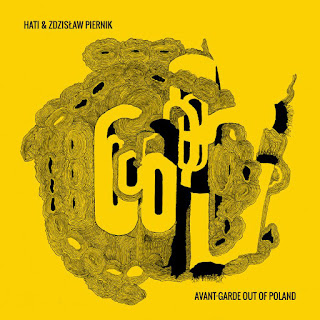 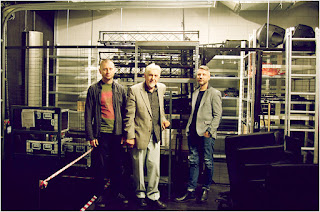 It's a rare ocassion to have an album where two different worlds and two different generations collide and come out of this happenstance triumphantly with abrased edges of a new shape that seemed a bit uncanny in the first place.
Poland has long tradition(although I am not sure if thisis the correct term) of avant-garde experimentalism e.g. Polish Autumn Festival, activity of Experimental Studio of Polish Radio, Krzysztof Penderecki, Tomasz Sikorski, Rudnik, Serocki, Krauze, Knittel, Serocki, Schaeffer, Michniewski, Free Jazz made there but also one of the nestors Zdzisław Piernik - the master of improvised, prepared tuba.
Together with both Rafałs - Iwański and Kołacki they are the demiurge protagonists of this ritual documented on the album released by Requiem Records which archives all the different aspects of Polish underground music releasing interesting albums from different genres - sometimes less obscure than you think. But nevertheless always a quality stuff.
Hati&Piernik collaboration wears full regalia of the experience that all 3 musicians gained independently working in their own time, in their own file, in their own space.
You have the subtlety and elegance of tuba by Piernik which is a substance linking both improvisational and collapsible sphere of sonorous composition with themes of introspective exploration on one level.
You have Hati and their affirmation of deep listening with the medal of honour in post-industrial shamanism - the viral obscolescence of forgotten worlds turned maijickal and rhythmical as well as the metaphor of the mortal coil through the reverbrating sound of the gong, clang, hum, hiss and stampede of awareness and conscious listening.
It's difficult to write about the albums and music that form their own genre. Its foundations lie way beyond the academia and plain educative aspect of music. It's the formation of the sonic core gone astray and finding the way back...to finally be in a completely different place. As Nicolas Bouvier said - the bedrock of existence lies somewhere else - maybe in trying to work out the formula, just to be there... What if we create a stable layer of infinity and reality joined together?